What Q1 GDP data does not reveal us about the struggling SMEs? Read Here to know 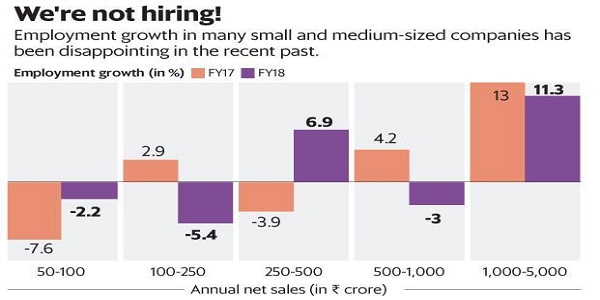 What Q1 GDP data does not reveal us about the struggling SMEs? Read Here to know

India’s June Quarter Q1 GDP estimates for the fiscal year 2018-19 at 8.2% and it may indicate due to filthy the implementation of GST and after effects of demonetization.

But does the same apply correctly for small and medium-sized enterprises (SMEs), which form a significant part of the country’s informal economy?

The implementation of GST came close to increase in demonetization.SMEs were among the worst hit. It has been more than a year still firms have not overcome with this twin of the blow.

Their profit and sales growth haven’t recovered, consequently impairing their ability to hire.

It should be noted that the GDP data does not capture the contribution of the informal economy given the data collection-related constraints to measure their performances.

Nearly 79% of the respondents reported that their employee base remained unchanged, in April-June Quarter while 17% added more staff. It showed only 4% either let go or did not replace outgoing employees.

The sample is a diversified one of 1,100 MSEs with revenue of up to RS. 25 crores across industries. However, the situation is improving. In July-September, 71% of SMEs intend to continue with their current employee base with no net additions, while only 3% foresee a reduction and 26% said they intend to hire, added the survey.

Same as the key benchmark indices are regularly increasing in its peak. A large number of mid-cap and small-cap companies continue to trade in the negative figure.

It is due to the fallout of dismal sales growth.

“Growth in sales was muted for these companies and hence did not result in more hiring. Companies at the lower end had to rationalize staff especially when production activity was affected by both demonetization and GST which made them scale back operations. Even in Q1FY19 companies with less than RS.100 crores, annual turnover witnessed negative sales growth,” said Madan Sabnavis, chief economist at CARE Ratings.

In spite of improved demand conditions, many small-sized firms are still struggling to meet their increased working capital needs. So, economists are not too convinced about the ability of SMEs to generate employment at least in the near term. In short, small is still not beautiful and it may remain so for a while.