Vodafone Idea: India’s largest telecom and also the vulnerable at most in the country 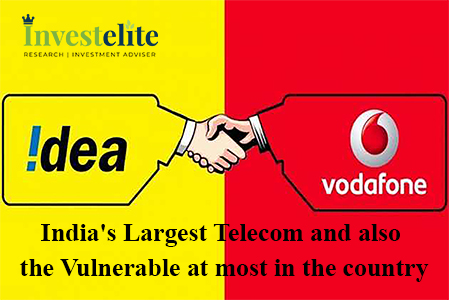 Vodafone Idea: India’s largest telecom and also the vulnerable at most in the country

Last week, Vodafone-Idea announced their completion of the merger, Reliance Jio Infocomm Ltd tweeted, “Bringing people together since 2016.”Reliance Jio’s beginning helped the two companies to merge about 18 months ago. The continued aggression of Reliance has meant that Vodafone Idea is in a far more undecided position that anyone had preassumed during the merger announcement. 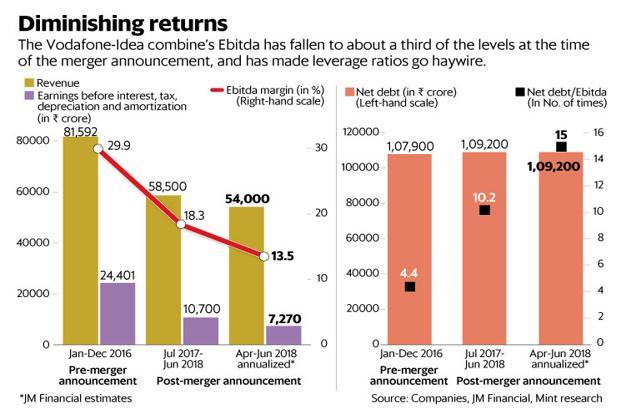 The two companies had reported a combined Ebitda of Rs. 24,400 crores for the 12 months till December 2016. Profit fell to RS. 10,700 crores in the 12 months till June 2018, last week Vodafone Idea reported. Ebitda stands for earnings before interest, tax, depreciation, and amortization.

In terms of revenue and subscribers, Vodafone Idea leads the industry by a huge margin. The scenario seems quite different when it comes to profitability and leverage ratios. Its trailing 12-month Ebitda, for instance, was 20% lower than that of Bharti Airtel Ltd’s India wireless business, even though its revenues were 33% higher.

Analysts at JM Financial Institutional Securities Ltd estimate that in June Quarter, combined entity’s annualized profit stood at merely RS.7,270 crores. Vodafone Idea’s net debt, meanwhile, is about 15 times its profit. In March 2017, during the time of merging, the net debt to Ebitda ratio was at roughly 4.4 times.

It is to be noted that net debt itself has remained more or less the same, despite sizeable equity funding at both companies this year. The idea raised RS. 6,750 crores through a preferential issue to promoters and other institutional investors. While Vodafone Group Plc invested RS.8,600 crores in its Indian arm.

Due to cut-throat pricing in the industry, the considerable cash burn at the two firms. JM Financial’s analysts estimate a cash burn of roughly RS.4,000 crores each quarter for the merged entity, adding that its cash balance should last about five quarters, assuming there is no recovery in tariffs.

Reliance Jio is done with its aggression on tariffs. It has quickly captured a majority share in the smartphone segment. Recently, it has entered in the postpaid segment. It is yet to make major inroads in a feature phone segment. Currently, its revenue in the share market is 23%, which is about half of its aspiration.

Even if tariffs remain the same its market shares will increase by Reliance Jio can erode profitability further at Vodafone Idea. In recent months, subscriber and revenue data shows that it has been losing market share, while Airtel has been fairly successful in defending its share. Vodafone Idea has its task cut out, with the merger hurdle now being crossed. Perhaps, it may even need to increase additional equity, given the continuing cash burn, and the need to invest heavily.

But at the point, Vodafone Group seems to be in no mood to invest heavily in the Indian business.  Instead, it is selling part of its holding to Idea’s promoters and has already de-consolidated the Indian operations from its books of accounts. Despite being the largest telecom it has observed by the analysts that the merger company is most vulnerable in the country.