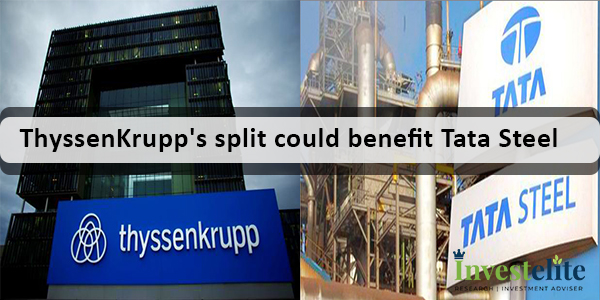 ThyssenKrupp AG, splitting up, which leaves two top executives departing. It had caused some anxiety among Tata Steel  Ltd’s investor’s joint venture with Tata Steel is still on the track.

According to ThyssenKrupp, it expects to get shareholders approval in a time duration of 12- 18 months. Joint Venture remains on the track through some delays could take place in closing.

ThyssenKrupp declared a spin-off in two companies. The first one will house industrials, with categories such as elevators, components technology and industrial solutions. The second will house the materials business, which includes material services, industries, marine systems and the steel JV with Tata Steel. The new industrials company will be more profitable and likely to trade at higher market valuations.

JV is important for Tata Steel, as it will help lower debt on its books and improve profitability.

ThyssenKrupp said the residual materials’ business earned pro forma revenue of €18 billion and adjusted Ebit (earnings before interest and tax) of €550 million in 2016-17, resulting in a margin of 3.1%.

The steel Joint Venture had estimated annual revenue of €18 billion as of March 2018. If we consider a moderately conservative Ebit margin 5%.ThyssenKrupp steel business earned a margin of 6.1% in 2016-17), it translates to an Ebit of €900 million. At the half, ThyssenKrupp’s share will be €450 million, substantial compared to €550 million.

The steel JV’s contribution to Ebit is, therefore, playing a major part in the industrial entity’s market valuation. This matter, as earlier the two companies had changed their JV agreement, stating that ThyssenKrupp would have a 55% economic interest in the proceeds of an initial public offering (IPO), with Tata Steel getting 45%. This concession was given to balance for a decline in Tata Steel’s UK profit margins from the time the JV was planned.

While that arrangement will stay in place, ThyssenKrupp may not feel the need for an IPO under the new structure. That would work to Tata Steel’s advantage.