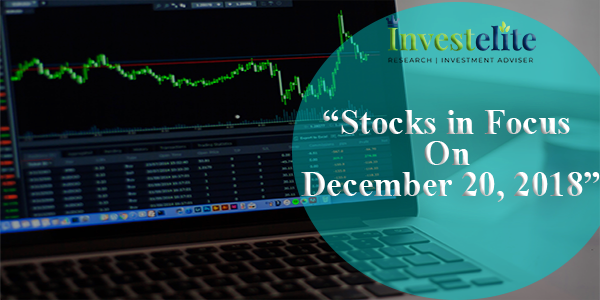 Canara Bank: Board decided to raise additional Tier I capital through Basel III compliant additional Tier I perpetual bonds in rupee terms for an amount not exceeding Rs 3,000 crore in single tranche or in multiple tranches, depending on the market conditions & subject to necessary approvals.
Allcargo Logistics board decided to explore the emerging business opportunities related to Container Freight Stations, Inland Container Depots and Logistics Parks in India.

Syndicate Bank: The bank allotted 18,36,99.217 equity shares for cash at an issue price of Rs 239.63 per share to Government of India. With this allotment, the shareholding of government increased from 73.07 percent to 76.16 percent.

Wockhardt – Capital raising committee meeting will be held on December 22, 2018, to consider and approve fundraising

Gujarat Gas: January 16 has been fixed as the record date for determining the eligibility of shareholders, with regard to sub-division of company’s equity shares.

Uflex presents ‘The Next Big Thing in pharma packaging

Quess Corp/Thomas Cook – Approved the amendments in the Composite Scheme of Arrangement and Amalgamation between Thomas Cook (TCIL), Quess Corp, subsidiaries of TCIL and their respective shareholders

Endurance Technologies: After the favourable court order, the company will announce a suitable compensation package for all its eligible permanent workmen employed on the rolls of the plant in Manesar, Haryana and discontinued operations of the said plant with immediate effect.

Manappuram Finance: The Financial Resources and Management Committee of the Company approved the allotment of 42,309 unlisted unrated secured redeemable non-convertible debentures having a face value of Rs 1000 each for Rs 4,23,09,000 on private placement basis.

Alembic Pharma – USFDA conducted an inspection at the company’s API Facility located at Panelav from December 17 to 19. Issued zero 483s

Sarup Industries: Board considered the resignation Chakkarvarti Sharma from the post of Chief Financial Officer of the company.

DRS Dilip Roadlines: Aryaman Capital Markets Limited purchased 2,00,000 shares of the company at Rs 75.5 per share while Shah Babulal Vadilal HUF sold 1,12,000 shares at the same price on the NSE.

Tube Investments of India: Conference Call with Institutional Investor on the unaudited financial results for the second quarter ended September 2018 is scheduled on December 20.

Izmo: The analyst/institutional investors meeting with senior management of the company to be held on December 20 organised by Valorem Advisors, to discuss about the ordinary course of business and industry.

Gujarat Pipavav Port: The company has a meeting with lndsec Securities & Finance on December 20.

Wockhardt: Board meeting will be held on December 22 to consider fundraising.