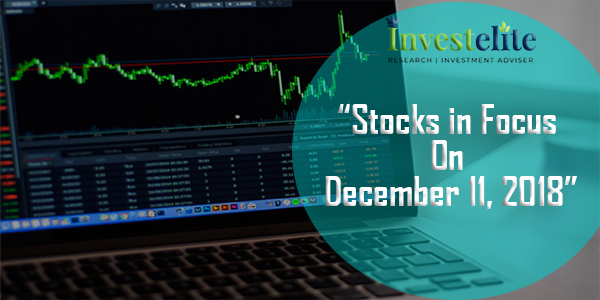 Lupin: Company received tentative approval from USFDA for Apixaban tablets, 2.5 mg and 5 mg, which is indicated for reducing the risk of stroke and systemic embolism in nonvalvular atrial fibrillation.

Infibeam Avenues: ICRA revised rating on company’s long term fund based facilities to A from A+ due to subdued scaling up of profits in certain business segments.

Quess Corp: Ajit Isaac acquired 48,000 equity shares of the company from the open market on December 7, taking a total stake to 12.07 percent from 12.04 percent earlier.

Sayaji Industries: Company has fixed December 28 as record date for determining the shareholders entitlement for sub-division of one equity share of Rs 10 each into two equity shares of face value of Rs 5 each.

Titagarh Wagons: Company has received a contract for manufacture and supply of 5,058 wagons to Indian Railways. The value of the order is Rs 1,560.87 crore.

Cox & Kings: Subsidiary gets necessary approvals for the sale of the service unit

Shubhlaxmi Jewel Art: Kirtikumar Prabhudas Vora purchased 72,000 shares of the company at Rs 28.79 per share on the NSE.

Escorts: Company has scheduled a conference call with the investors & analyst for the discussion on “Kubota and Escorts join hands for global leadership on December 11.

Infibeam Avenues: Board meeting is scheduled on December 13 to evaluate the feasibility of and options for strategic growth opportunities of the business verticals and subsidiaries of the company.

Zydus Wellness: the Extra-ordinary general meeting is scheduled on January 4.

Moschip Semiconductor Technology: Board decided to conduct the postal ballot for seeking approval of shareholders for the appointment of Venkata Sudhakar Simhadri as a Managing Director of the company.

Larsen & Toubro Infotech: Analyst day of the company will be held on December 12.

JSW Steel: Analysts/Institutional investor meeting will be held on December 11 and 12.

State Bank of India: Executive Committee of Central Board meeting is scheduled to be held on December 12 to examine the status and decide on long-term fundraising in single/multiple tranches up to $1.25 billion through a public offer and/or private placement of senior unsecured notes in US dollar or any other convertible currency during January to March, 2019.