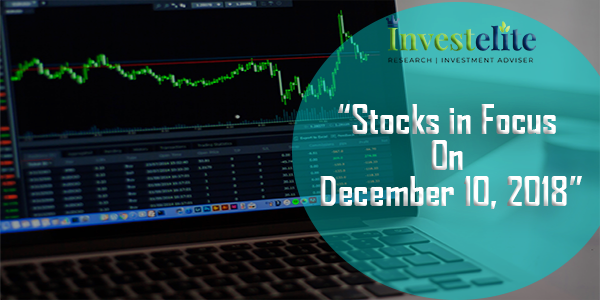 Axis Bank: Board appointed Amitabh Chaudhry as an Additional Director of the bank and to hold office as such till the conclusion of the ensuing Annual General Meeting and as the Managing Director & CEO of the bank, for a period of 3 years, with effect from January 1, 2019. Board approved the reappointment of Samir Barua, Som Mittal and Rohit Bhagat as Independent Directors of the bank for their second consecutive term from April 1, 2019 upto the expiry of their respective tenure of 8 years.

IOC board meet on December 13 to consider buyback of equity shares and interim dividend for the Financial Year 2018-19.

Ashoka Buildcon: Company received Letter of Acceptance by Rail Vikas Nigam Limited, for the project in connection with 3rd Line from Sonnagar to Garhwa Road in Dhanbad Division of East Central Railway, Bihar and Jharkhand in 2 packages. The aggregate accepted bid value of the project is Rs 794.20 crore.

Escorts: Company has executed the business transfer agreement for transferring the existing RT crane business of the company as a going concern on a slump sale basis to the JV (with Tadano Limited, Japan) for an amount not exceeding Rs 35 crore.

Mangalam Drugs & Organics: Unit-1 facility was recently inspected by WHO prequalification team and the company has received the WHO Pre-qualification approval for Unit-1.

Punjab and Sind Bank board meeting on December 12, 2018 to consider issue of equity shares by way of QIP upto an amount of Rs 500 crore

IL&FS Engineering and Construction Company: Ganapathi Ramachandran, Non-Executive Independent Director of the company tendered resignation from the directorship of the company.

Seamec: Company entered into a Charter Party with Supreme Hydro Engineering Pvt Ltd for charter hire of vessel ‘Seamec Princess’ for working at Mumbai High Offshore. The tenure of the contract is for a firm period of 150 days with option for extension. The value of Charter during firm period is $3.08 million.

VXL Instruments: Board appointed Kishan S Rao as the Chief Financial Officer (CFO) of the company.

Pritish Nandy Communications: Company announced the launch of the first season of its 10 episode Amazon Original show ‘Four More Shots Please’ to be streamed on Amazon Prime from January 25 2019.

Capital India Finance: Board approved the issue of upto 3,45,48,560 equity shares at an issue price of Rs 72 per share, on rights basis, aggregating up to Rs 248.75 crore; and fixed rights entitlement ratio at 4:5.

Precision Camshafts: Mahesh A Kulkarni, Company Secretary and Compliance officer of the company has resigned from the company.

Pritika Auto Industries: Board approved to increase in the limit of investment by foreign institutional investors (FIls) and non-resident individuals (NRIs’) in the company’s equity share capital.

Gopal Iron & Steels: Board meeting is scheduled on December 15 to consider sale of asset of the company.

Gallantt Metal: Extraordinary General Meeting to be held on January 4, 2019.

Indian Oil Corporation: Board meeting is scheduled on December 13 to consider buyback of the fully paid-up equity shares of the company and declaration of interim dividend for the financial year 2018-19.

Titan Company: Company’s officials will be meeting fund houses or insurance firms on December 10, 12 and 14.

Supreme Infrastructure India: 35th Annual General Meeting of the company is scheduled to be held on December 31.

Lesha Industries: Board meeting is scheduled on December 26 to consider the sub division/ split of equity shares of the company.

Alembic Pharmaceuticals: Meeting of the NCD Committee of the Company will be held on December 14 to consider the issue and allotment of Unsecured Listed Redeemable Non-Convertible Debentures (NCDs) of upto Rs 350 crore on private placement basis.

Punjab & Sind Bank: Board meeting is scheduled to be held on December 12 to consider issue of equity shares by way of QIP upto an amount of Rs 500 crore.

PPAP Automotive: Company’s officials will be attending conference of analysts and investors organised by Ambit Capital on December 10.

Panyam Cements & Mineral Industries: 62nd Annual General Meeting of the company is to be held on December 31.

RCL Retail: Eighth Annual General Meeting of the company is scheduled to be held on December 29.