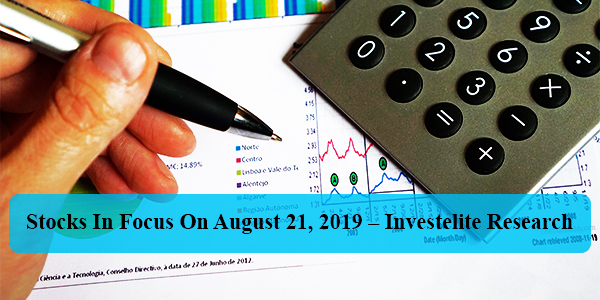 Sun Pharma Advanced Research: US company Abraxis Biosciences LLC filed plea against the company, alleging that company’s filing of New Drug Application (NDA) for Taclantis injection is an act of infringement of the Orange Book listed patents for Abraxane. The company believes that the lawsuit is without merit and will vigorously defend against these allegations.

SpiceJet: Company will shift its entire operations at Mumbai to Terminal 2 of Chhatrapati Shivaji Maharaj International Airport from October 1 and single terminal operations will lead to better synergies and cut down costs substantially for the airline.

Alembic Pharmaceuticals: Company’s Bioequivalence facility in Vadodara inspected by the US Food & Drug Administration (USFDA) with no 483s observations.

HDIL: Company has been admitted under provisions of IBC and company is under process to file an appeal to NCLAT against the order passed by NCLT.

Freshtrop Fruits: The board, at its meeting scheduled to be held on August 23 to consider the proposal of buyback of equity shares of the company.

NK Industries: Board meeting of the company is scheduled for August 28 to consider voluntary delisting of shares.

Supershakti Metaliks: Board meeting is scheduled to be held on August 23 to consider the proposal for issue of bonus shares.

Riga Sugar Company: Satya Ranjan Mallick has resigned from the post of Chief Financial Officer of the company.

Nova Iron & Steel: Company delayed submission of June quarter financial results due to the resignation of statutory auditors on August 14.

Central Bank to raise up to Rs 3,000 crore core capital from markets.