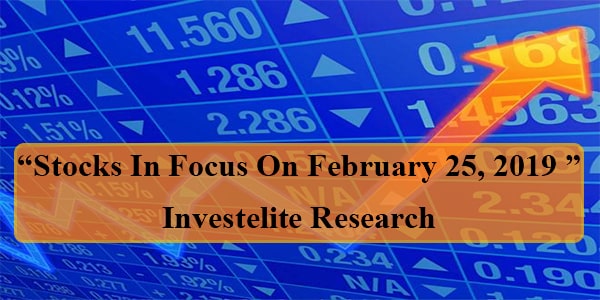 IIFL Holdings clarification: SEBI order on IIFL Commodities has no impact on businesses of other companies of IIFL Group.

Tata Metaliks board meeting will be held on February 27, 2019 to consider, a proposal for raising of funds

Hubtown: Company divested and transferred its entire holding of 4,720 equity shares in its subsidiary Heet Builders.

Tulive Developers: Board approved the buyback of up to 4,80,000 equity shares of the company at a price of Rs 350 per equity share.

Vyapar Industries: Board approved the buyback of up to 15,30,000 equity shares of the company at a price of Rs 29 per equity share.

Jet Airways: An additional two aircrafts have been grounded due to non-payment of amount outstanding to lessors under their respective lease agreements.

GVK Power & Infrastructure: Equity shareholding of the GVK Group will increase to 64 percent from the existing 50.5 percent of the total paid-up share capital of Mumbai International Airport Limited after the acquisition of 13.5 percent stake from Bid Services Division (Mauritius).

Shakti Pumps: Akhilesh Maru tendered his resignation from the post of Chief Financial Officer as he is looking to start his own enterprise.

Sandhar Technologies: India Ratings and Research assigned a rating of A1+ to company’s commercial paper.

CARE has reaffirmed credit rating on the bank facilities of PNC Infratech‘s subsidiary, MP Highways as CARE A with stable outlook

Asahi Songwon Colors: Company planned a shutdown of CPC Crude Blue Plant at Padra, Vadodara with effect from February 24 to carry out the periodic maintenance, which will affect CPC crude blue production for the quarter ending March 2019. The shutdown is expected to last up to March 7, 2019.

Manugraph India: Suresh Narayan, Chief Financial Officer of the company has decided to pursue other opportunities and tendered his resignation.Allahabad Bank: Out of the capital infusion fund of Rs 6,896 crore received from the Government of India, Rs 2,750 crore has been appropriated to make loan loss provision in order to bring down the net NPA ratio below the threshold under Prompt Corrective Action Framework and remaining

Rs 4,146 crore has been appropriated towards shoring up the capital base so as to enhance the Capital to Risk Weight Asset Ratio (CRAR).

Kotak Mahindra Bank: Mark Newman, a Non-Executive Non-Independent Director of the bank has resigned from the board.

Mcleod Russel: Company announced execution of Memorandum of Understandings by the wholly owned subsidiary (WOS) for disposal of its stake in one of its subsidiaries and disposal of a part of its holding in another subsidiary by the WOS.

Hindustan Zinc: Agnivesh Agarwal steps down as Chairman and Director of company to pursue other interests.

Reliance Industries: Subsidiary Reliance Industrial Investments and Holdings Limited (RIIHL) entered into agreement for acquisition of equity shares of software service and data solutions company Surajya Services Private Limited (Easygov) for up to Rs 18 crore. RIIHL will further invest an amount up to Rs 50 crore. The said investment upon completion will translate into 76 percent equity stake in Easygov on a fully diluted basis. The total investment is likely to be completed by March 2021.

Reliance Industries: Subsidiary RIIHL entered into an agreement for acquisition of equity shares of software company SankhyaSutra Labs Private Limited (SSL) for up to Rs 16,02,08,808. RIIHL will further invest an amount of up to Rs 200 crore and is likely to be completed by December 2021. The said investment will translate into around 83 percent of equity capital in SSL on a fully diluted basis.

Reliance Industries: RIIHL entered into a agreement for acquisition of equity shares of Reverie Language Technologies Private Limited (Reverie) for up to Rs 190 crore. RIIHL will further invest an amount up to Rs 77 crore. The said investment upon completion will translate into 83.30 percent equity capital in Reverie on a fully diluted basis.