SBI to announce Q1 Results: Loss Expected due to high provision, but NPA’s may fall 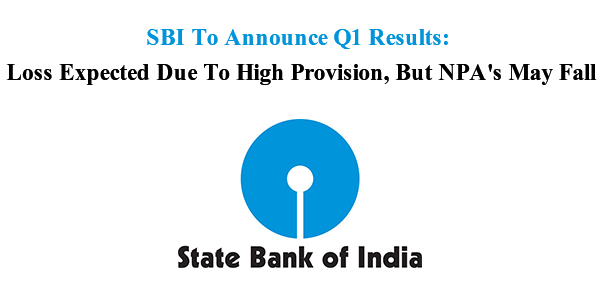 SBI to announce Q1 Results: Loss Expected due to high provision, but NPA’s may fall

On Friday, India’s biggest lender by assets State Bank of India (SBI) is to unveil Q1 numbers of its financial results. SBI is likely to post a net loss of RS. 30.6 crores due to jump in the provisions as per the estimation poll of analysts. However, NPA’s may decline. The bank will announce its results by 12 p.m.

Though a loss, it will be almost lower than the net loss of RS. 7,718 crore reported in the fourth quarter ending March 2018. In the June quarter last year, SBI had reported a net profit of Rs 2,005.5 crore.

Motilal Oswal, brokerage firm has conflicted estimate. It expects the bank to post a 16% year-on-year (YoY) drop in net profit to Rs  1,683 crore.

Net interest income (NII) or the difference between interest paid on deposits and interest earned on loans is estimated to increase by 17 % YoY to Rs 20,584.5 crore from Rs 17,606 crore in the same quarter a year ago.

From last year, other income or non-interest income is expected to come to slippage at Rs 730 crores from Rs 800.5 crores.

Motilal Oswal expects NII to stay flat sequentially. “We expect loan growth to be muted (+2% QoQ) but pick up slowly from the previous few quarters. NII is expected to be sequentially flat, as interest reversals are expected to keep yields under pressure and loan growth remains sluggish,” the Motilal report said.

In reported added,”Stress additions should moderate to 2.3 % levels as most of it has been recorded in prior years”.

In the March quarter, It expects gross non-performing assets (GNPAs) to reduce to 10.7 % of total loans from 10.9 % and be slightly higher from 10.0% in June quarter.

“Asset quality problems are largely recognized, and we derive comfort from clarity on the quantum of stress on the books. As a trend, a bulk of corporate slippages has occurred from the watch-list while the performance in core portfolio has been very strong. With merger issues largely behind, improvement in operating leverage is expected to further aid earnings recovery,” it said.

One thought on “SBI to announce Q1 Results: Loss Expected due to high provision, but NPA’s may fall”