RIL continues rising this year with stock up over 40%, hits RS.1300 apiece 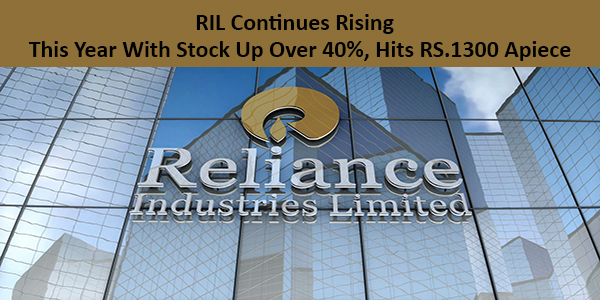 RIL continues rising this year with stock up over 40%, hits RS.1300 apiece

On Tuesday, Reliance Industries locked a new milestone, hitting Rs 1,300  apiece. In the past few sessions, its shares are rising with a positive momentum in the market. The index heavyweight has seen a smashing run in 2018, rising over 40 % on a year to date basis.

On Monday for June Quarter, the stock had risen by a percent by the back of good revenue market share(RMS) data. The data showed Jio replacing Vodafone India to become the second-largest telco by RMS.

The market capitalization of Reliance Industries touched Rs 8 lakh crores on the BSE as well in a most recent. It has been visible the huge upward rising especially after the company laid out big plans at its annual general meeting (AGM), including the launch of its fiber-to-the-home service, gig fiber.

On July 13, 2018, the stock surpassed m-cap of Rs 7 lakh crores. On 12th July, the company crossed  $100-billion market capitalization mark for the first time in the last 10 years.IT bellwether Tata Consultancy Services’ market valuation had in May surged past Rs 7 lakh crore.

Mukesh Ambani-owner of the company started the financial year 2018-19 with first quarter consolidated profit at Rs 9,485 crores, which grew by 0.3 % compared to Rs 9,459 crores in the previous quarter. It is marked by good results. The year-on-year bottom line growth was 4.5 %

During the quarter, consolidated revenue increased 10.1 % sequentially up to 42 % YoY) to Rs 1.29 lakh crores. The growth was primarily on account of higher realizations of refining and petrochemical products led by 49 % YoY increase in Brent oil price.

He added,”Overall, its petrochemicals profit is likely to touch to Rs 29,300 crore in FY20 compared to Rs 13,000 crore in FY17… We expect gross refining margin would remain strong in medium to long term. Further, strong growth in its retail business profits is likely to be maintained for higher consumption growth in India. Also, on Jio side, the company’s strong net subscriber addition and entry to Enterprise and Fiber-to-Home business would augment its profitability,”

One thought on “RIL continues rising this year with stock up over 40%, hits RS.1300 apiece”