Nifty to touch 11,000 Bear Market: 5 Reasons to know why stocks are rising 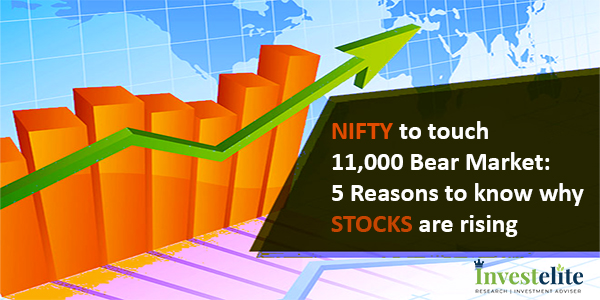 Nifty to touch 11,000 Bear Market: 5 Reasons to know why stocks are rising

Jayant Manglik, President, Religare Broking said, “We usually see such volatile moves prior to the market bottom or top but it’s too early to confirm the same”. He suggests traders should restrict leveraged positions, and in the meanwhile, prefer only hedged trades.

Here are five reasons that are responsible for declining the market:

Nifty Financial Service index fell 2 % which reflects that fears of liquidity crunch have not abated yet.

DSP MF also has some exposure to IL&FS group which defaulted on interest rate payments.

2. Increase in prices of Crude Oil

Crude oil prices increased as US markets started just weeks ahead of Washington’s plan to impose new sanctions against Iran with will be effective from November.

Commodity merchants Trafigura and Mercuria said that Brent could rise to $90 per barrel by Christmas and even above $100 in early 2019 as markets tighten once US sanctions against Iran are implemented from November.

JP Morgan expects the sanctions could lead to a loss of 1.5 million bpd, while Mercuria warned that as much as 2 million bpd could be knocked out of the market.

On Monday, the Nifty50 fall from its crucial support placed at 11,100 levels in the first 60 minutes of trade. After Friday’s carnage, most analysts suggest that we might be in for some more volatility ahead of F&O expiry.

On the higher side, 11,200-11,220 will act as a crucial resistance level for the index while on the downside 10,866 which was the intraday low recorded on Friday will act as crucial support for the index.

Gaurav Ratnaparkhi, Senior Technical Analyst Sharekhan by BNP Paribas, “A higher time frame i.e. the weekly chart shows that the index has formed a large bearish bar for the third consecutive week. The weekly momentum indicator has triggered a fresh bearish crossover. Thus the index is likely to continue with the fall & can target 10815 on the downside”.

Overseas investors have pulled out a massive Rs 15,365 crores ($2.1 billion) from the capital markets in September so far, after putting in funds during the previous two months, on widening current account deficit coupled with global trade tensions.

The US-China trade war continues to be in keeping in focus as both countries imposed fresh tariffs on each other’s goods today.

Earlier this year, US and China have already slapped tariffs on $50 billion worth of each other’s goods.

Soon after the fresh duties went into effect, China accused the United States of engaging in “trade bullyism” and said it was intimidating other countries to submit to its will through measures such as tariffs, reports Reuters quoting official Xinhua news agency.

The latest outflow comes following a net infusion of close to Rs 5,200 crores in the capital markets, both equity and debt, last month and Rs 2,300 crores in July. Before that, overseas investors had pulled out over Rs 61,000 crores during April-June.