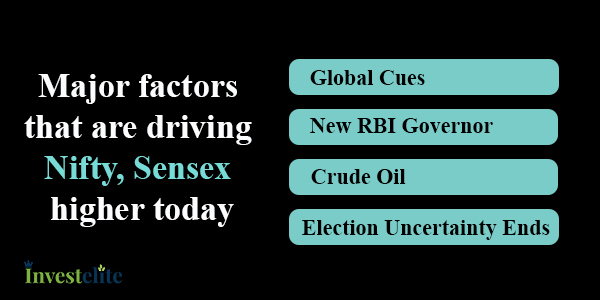 Bulls were back on Dalal Street on Wednesday after the outcome of state elections ended political uncertainties and the appointment of new RBI Governor Shaktikanta Das.

Asian markets were trading higher after a news report indicated that China is expected to cut tariffs on cars made in the US to 15 percent from the current 40 percent. Japan’s Nikkei, Hong Kong’s Hang Seng and South Korea’s Kospi gained 1-2 percent while China’s Shanghai Composite was up 0.24 percent.
The gains in global peers were also on account of improvement in trade relations between world’s largest economies US and China.

The uncertainties over five states poll results finally ended after the Congress party has made strong gains in key states, winning in Rajasthan and Chhattisgarh, and decided to form the government in Madhya Pradesh by taking support from others.
On the other hand, BJP lost in all state elections. TRS won in Telangana and MNF in Mizoram.

Now all focus will shift to Lok Sabha elections which will take place in 2019 and analysts expect volatility to continue in 2019 as there could be a close fight between Congress and BJP after results of five state elections.

“There is no direct correlation between the outcome of these ‘semi-final’ state polls and the Lok Sabha polls.

The government appointed Shaktikanta Das as new RBI governor on Tuesday, easing concerns raised after the surprise exit of Urjit Patel on Monday.

Now the market will look at Das’ take on liquidity, corporate governance and prompt corrective action.

“Now it is upto Shaktikanta Das to prove his credentials. IAS officers like Subbarao and YV Reddy have proved themselves as great RBI governors who refused to toe the government’s line.

Das with his rich experience in finance and economic management and expertise in team management has the competence to heal the wounds that have risen from the friction between the central bank and the government, he added.

Crude oil prices remained in favor of India which imports around 85 percent of the requirement.
Brent crude futures, the international benchmark for oil prices, continued to be range-bound around $59-62 a barrel after falling more than 28 percent from $86.29 a barrel touched on October 3, 2018.
Experts said if the crude oil prices remain around these levels for a couple of months or more then earnings could be healthy in the second half of FY19.