Looks Like A Masterstroke By BJP As Elections Are Coming Next Year -BJP ends alliance with PDP in J&K; Mehbooba Mufti Resigns. 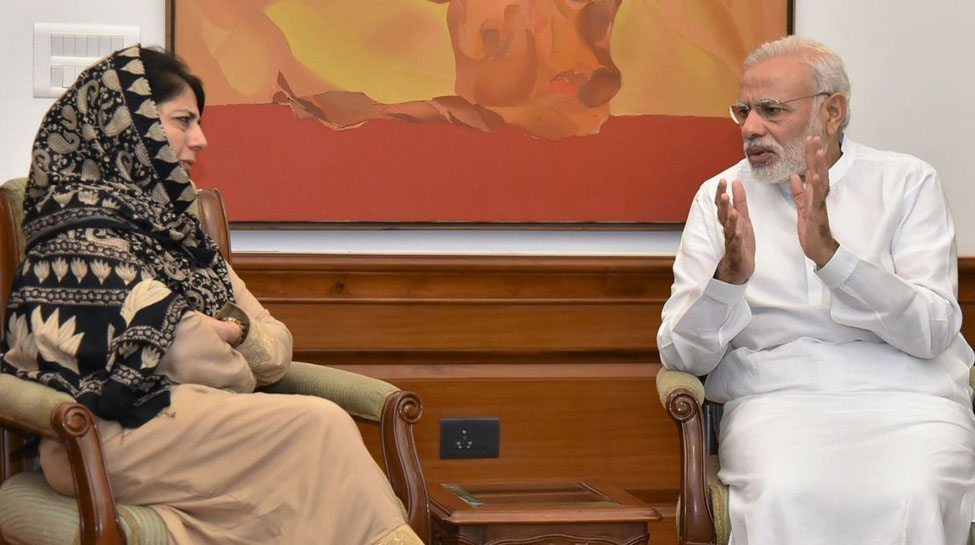 Looks Like A Masterstroke By BJP As Elections Are Coming Next Year -BJP ends alliance with PDP in J&K; Mehbooba Mufti Resigns.

BJP may be controlling the state through governor and this may be done to maintain law and order thought army .

The resignations were sent to state governor Narinder Nath Vohra.

Minutes after the Bharatiya Janata Party (BJP) pulled out of the alliance with People’s Democratic Party (PDP) in Jammu and Kashmir, Mehbooba Mufti and her team of ministers sent their resignations to the state governor Narinder Nath Vohra.

The state is now headed for President’s rule.

“We have taken a decision, it is untenable for BJP to continue in alliance with PDP in Jammu & Kashmir, hence we are withdrawing,” he said

The alliance fell out following differences in opinion over revoking a month-long suspension of a ceasefire in the state during the Holy month of Ramzan. While the Mufti-led PDP wanted Centre to reach out to the separatists, the latter argued that the separatists were given several opportunities to stop their terror-related activities.

Citing the assassination of Rising Kashmir’s editor Shujaat Bukhari‘s, Madhav said, “Terrorism, violence and radicalisation have risen and fundamental rights of the citizens are under danger in the Valley. Shujaat Bukhari killing is an example.”

The veteran journalist was shot dead in Srinagar by unidentified assailants last week.

The step was taken keeping in mind the larger interest of India’s security and integrity and that J&K is an integral part of India, said Madhav.

“In order to bring control over the situation prevailing in the state we have decided that the reigns of power in the state be handed over to the Governor. Even if Governor rule is imposed in the Jammu & Kashmir, our efforts to fight terrorism will continue. We had to respect the mandate of the people. If we would not have formed govt at that time, Governor’s rule or Presidential rule would have been imposed in the Valley. We had an alliance with them just for the mandate that was given by people,” he added.

Earlier on Tuesday, BJP president Amit Shah met party legislators from Jammu and Kashmir and state unit leaders at the party headquarters in Delhi on Tuesday. There were reports that PDP was reportedly unhappy with the Centre’s decision to revoke the month-long suspension of the ceasefire which was in force during Ramzan.

In the current Assembly, the BJP has 25 MLAs and the PDP 28 MLAs. The majority mark is 45.