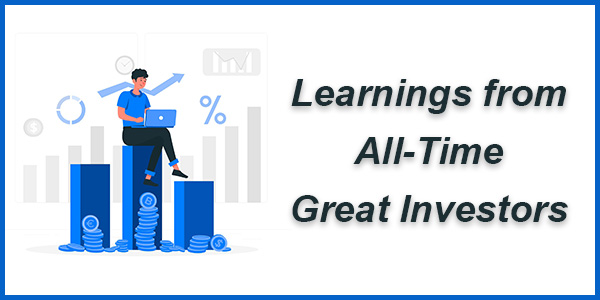 Investors are those who invest their money to build wealth. Investors can be anyone who invests their money to make money. It can be either a businessman, real estate investor, or Stock investor. But in this article, we talk about stock market investors. This article has a list of the 10 greatest investors in the world.

The major work of any investor is to find a good business to invest in. Most of the time is spent in finding good investments for themselves. They never invest their money which they do not understand. They are very wise men. They are also wise in managing money.

All the great investors have their own investing philosophies. They have their investing style, you can learn something from all of them. You can learn from their books which they have written with their experience and knowledge.

Now let’s look at these greatest investors one by one.

He is a very well known investor in the world. You are reading this article means you must know him.

Warren Buffett started investing when he was 11 years old. He is an avid reader. He read all the books on investing which were in Omaha public library when he was young. Now he also read most of the time.

Peter Lynch is a fund manager in America. He manages Fidelity Investment. He is a great investor. His fund always outperforms the market. He has a net worth of US $352 million.

He has written many books on investing. You can learn much more from his books. His major 3 books are: One up on the wall street, Learn to earn, Beating the street. He is a value investor. He has his own investing philosophies.

Never listen to the professionals, do your own research.
Invest in what you know.

George Soros is a billionaire investor. He has a Net worth of $8.3 billion. He is also a philanthropist. He is a great investor.

He has denoted $ 32 billion to his Open Society foundation. He is also known as the man who broke the bank of England because he short sold pounds sterlings.

George Soros is also involved in politics. He has denoted many political parties. He has donated $11 billion to various philanthropic causes.

Best book: The Alchemy of Finance

Rakesh Jhunjhunwala is a well-known investor in India. He has made billions from investing. He also invests in Startups. He is a great investor. He is called Warren Buffett of India. He is known as Big Bull in the Indian stock market. He has a net worth of $ 2.9 billion.

Ray Dalio is an American investor, hedge fund manager, and philanthropist. He was the co-chief investment officer of Bridgewater Associates since 1975. Bridgewater is one of the world’s largest hedge funds.

Ray Dalio is a successful investor. He was one of the highest-earning hedge fund managers. He has a net worth of $ 18.7 billion. He has written a wonderful book named Principles. He has incorporated all his life principles in his book. Book Everyone should read.

Seth Klarman is a great investor and fund manager. He is CEO and president of Budapest Group, where he manages more than $30 billion of funds. He has a net worth of $1.9 billion. Budapest group is one of the largest hedge funds.

Seth Klarman is an expert in value investing. His book “Margin of Safety” is classic for value investors. You must read this book.

He is also involved in Philanthropic activities.

Charlie Munger is a well-known name in the investing world. He is a great investor. He is the Vice-chairman of Berkshire Hathaway. He is a partner and friend of Warren Buffett.

Charlie Munger is 96 years old. He is an expert in value investing. He is a very wise man, he loves to lead biographies.

He knows how to pick the best stocks for investing. Many investors follow Charlie Munger to learn from his investing philosophies. You can also learn from Charlie Munger. There are many videos out there on youtube. He has also written a book called Poor Charlie’s Almanck. You must read this book.

Joel Greenblatt is an American investor and a hedge fund manager. He is an author also. He is a value investor. You will enjoy reading his book “ A little book that beats the market”.

In his book, he mentioned A magic formula of investing. His magic formula says that you should buy in the company whose Earning yield and Return on capital is more.

Mohnish Pabarai is an Indian-American Investor and philanthropist. He is an eminent investor, he started investing with $ 1 million after selling his internet business.

He started a Dakshana Foundation to help poor students to study and prepare for IIT and medical. He started this foundation to give his money back to society.