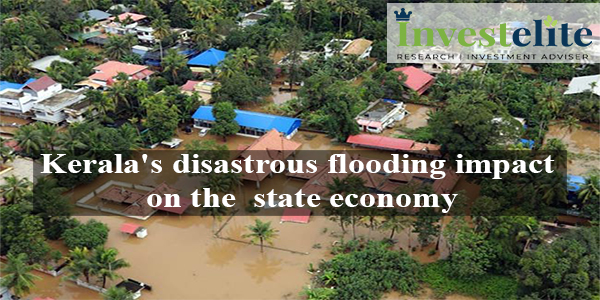 The effect of floods in Kerala leads the sharp impact on the people of Kerala as well as on the economy of the state.

The consequences are seen quite significant as reconstruction and recreation among affected districts will likely to have huge economic and financial costs.

According to the rating agency employment, nearly 4.13 million individuals of the districts of Kerala have been affected because of the disruption. Estimated a wage loss of RS.4,000 crores for August 2018 on an average rate of RS. 400 per day.

Families who are residing in the base camps are around 1 million and they will be either sustained by the central government or with the contribution of other states. On calculation, it has seen that they will need a minimum sum of around Rs.10 crores a day and RS.300 crores a month.

The state economy is likely to decline in growth rates in 2018-19. Recently Kerala accounts for the highest share of consignment into the country. As per the RBI, Kerala share in total consignment for 2016-17 is 19%, which work out to $10.7 billion. Nearly 60% of the consignment is usually towards the consumptions and maintenance of the family,20% is towards the bank deposits and 8% is in investments in landed property or shares.

Although consignment to the state has declined in recent years to $10.7 billion 2016-17, from $12.6  billion in 2014-15. Global economics lower down and it accounts for around 60% of the migrants from Kerala. The flows of consignment are expected to increase on the back of increased support, including donations coming from various regions for flood rehabilition.

Kerala’s outstanding bank credit stood at Rs.2.81 lakh crores as of Q4FY17-18, which is 3% of the total bank credit. In recent quarters, there has been an increase in credit growth in the region. The year-on-year credit growth was 14.2% in 2017-18.

Reconstruction would lay higher borrowings by the households and businesses, it results in an increase in bank credit off taking or growth in the region. The rating agency says,”Credit growth could grow by 17-21% (year-on-year) in Kerala this year assuming all average rebuilding expenditure by households of the order of Rs 50,000-Rs1 lakh per unit is financed by banks. It is however likely that a large part could be from NBFCs too.”

CARE Ratings added,”At the same time, given the physical and economic disruptions caused, the debt servicing ability of borrowers is likely to be impacted in the next three to five quarters. This would be in the areas of agriculture and services in particular which have been affected by the floods. The old private banks which are dominant in this region would be challenged more due to their higher exposures”.