India set to launch $240 mn retaliatory tariffs on US imports 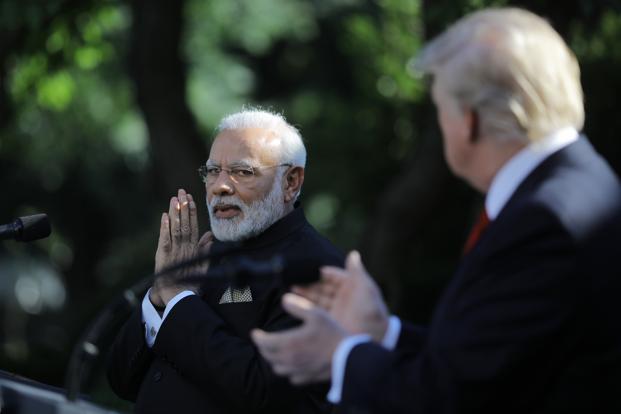 India set to launch $240 mn retaliatory tariffs on US imports

India has notified the WTO a revised list of 30 US imports, including apples, almonds, phosphoric acid and Harley-Davidson motorcycles, on which it intends to impose retaliatory tariffs.

India is likely to introduce retaliatory tariffs worth $240 million next week on a revised list of 30 items imported from the US to counter the American move to unilaterally hike duties on Indian steel and aluminium. The move comes at a time when India has decided to negotiate a “trade package” with the US to ease tensions between the two sides.

India on Wednesday notified to the World Trade Organization (WTO) a revised list of 30 items imported from the US, including almonds, apples, phosphoric acid and motorcycles with engine capacity more than 800 cc (including Harley-Davidson Inc.), on which it intends to impose retaliatory tariffs. Earlier, on 18 May, India had given the WTO a list of 20 items imported from the US worth $166 million on which it was proposing to hike tariffs. However, in the revised list, India has brought down the proposed maximum additional duties from 100% (on walnuts) to 50% (on Harley-Davidson).

India had asked the US government to exempt it from its 25% levy on steel and 10% on aluminium imposed by President Donald Trump on grounds of national security. However, the US rejected the Indian request. India has also dragged the US to the dispute settlement mechanism in the WTO over the matter.

Asked whether the proposal to retaliate against the US is posturing by India ahead of the trade talks, a commerce ministry official, speaking on condition of anonymity said: “The US goes ahead and does its own thing. Why should India be posturing only? When talks happen, we can use it as a bargaining chip.”

Trade minister Suresh Prabhu said on Friday after a two-day US visit that the talks he had were held in a positive atmosphere and that trade officials from both sides would soon meet to resolve all pending issues.

Assistant US trade representative Mark Linscott is likely to visit India in the last week of June to negotiate a “trade package”, the official quoted earlier said.

The package is likely to involve negotiations granting an extension to India on generalised system of preferences (GSP) that the US is currently reviewing. India exports about 3,500 items worth $5.6 billion to the US at zero or low duties. In exchange, India may facilitate more US imports in items such as dairy products and Harley-Davidson motorcycles.

Trump has often raised the issue of higher tariffs on Harley-Davidson motorcycles imposed by India and has threatened to put reciprocal taxes on Indian bikes, which he has wrongly claimed to be selling “in thousands” in the US.

Addressing the press on the sidelines of the G7 summit in Canada’s Quebec City last week, Trump specifically named India, accusing it of charging 100% tariff on some US goods. “We’re like the piggy bank that everybody is robbing,” Trump said