IL&FS requires up to Rs 300 billion in fresh equity more than Rs. 45 billion 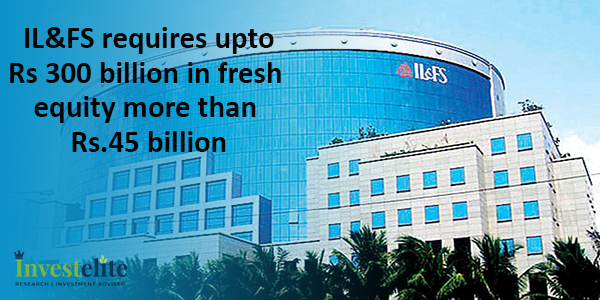 IL&FS requires up to Rs 300 billion in fresh equity more than Rs. 45 billion

IL&FS needs equity investment up to Rs. 300 billion to get back on the track. Before improving a single rupee IL&FS also have to take an impairment of at least Rs. 150 billion. IL&FS required equity stock could be in the range of Rs. 225-300 billion which is needed more enough than proposed Rs. 45 billion be the right to issue.

After estimating it get the right size of the balance sheet of Rs. 295 billion equal to standalone borrowings at IL&FS and ITNL. It has been estimated that IL&FS financial services (IFIN) and other financial subsidiaries of the group have Rs 250lakh billion in financial assets and Rs. 30 billion in equity.

IL&FS consolidated fixed assets, including concessions, are Rs. 610 billion which is based on a leverage of two (debt to equity). It needs to equity contributor of Rs. 203 billion. IL&FS also have Rs. 87 billion in equity investments, loans and advances and receivables from associates and these should form a part of equity and not be leveraged. All this would bring the total equity requirement to Rs. 320 billion it concludes.

IL&FS has a current shareholder fund of Rs 93 billion, leaving the required estimated equity investment at Rs 227 billion. A high power of estimate has been impaired as an example being the 1,200 Mw coal-fired power plant subsidiary that reported total assets of Rs 137 billion. This is very high, at Rs 115 million per Mw, compared to the industry benchmark of Rs 80-90 million per Mw. Insolvency proceedings have also been against this subsidiary by its lenders. Adding the capital required for IFIN with respect to loans to group companies and impairment for assets, to the extent of Rs 227 billion calculated above, makes the Rs 300 billion in the new capital a reasonable number,” it said.

Analysts estimate IL&FS will have to take high impairment for its assets on account of power and road projects. The energy company started facing problems after it set up the coal-based power plant and was capable to secure a power purchase agreement for only 540 Mw. It has been referred for insolvency proceedings to the National Company Law Tribunal (NCLT). “Besides, we estimate the Rs 5.5 billion in exposure to associates like Hill Country Properties, Dighi Ports (currently in insolvency) and IL&FS (also filed before NCLT) to have limited recoveries and, therefore, require impairment. We estimate Rs 12-14 billion write-offs is required at its large subsidiary, Chenani-Nashari Tunnelway. We have ascribed a value of Rs 34-36 billion versus the project value of Rs 48 billion on the company’s books, by discounting the annuities from the project at (an annual) 12%.”

It has estimated a write-off might even be required for IL&FS’ Rs 18 billion exposure to subsidiary IL&FS Maritime Infrastructure, which has high related-party transactions and had reported a loss of Rs 3 billion. It said the related-party loans in most cases were subordinated into the capital structure and in the bankruptcy process. Therefore, analysts have estimated that IL&FS has Rs 300 billion in loans at risk to its subsidiaries.

“Given the second-lien nature of the secured loans at the IL&FS parent and the ITNL parent, recovery could be constrained by the quality of the collateral, such as equity pledges from operating subsidiaries”.

One thought on “IL&FS requires up to Rs 300 billion in fresh equity more than Rs. 45 billion”