IL&FS crisis hit, NHAI might consider fitting to do a valuation 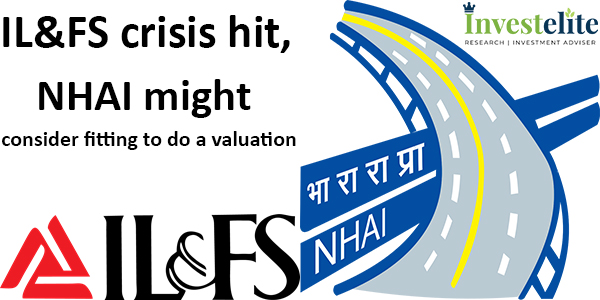 IL&FS crisis hit, NHAI might consider fitting to do a valuation

IL&FS and National Highways Authority of India might opt for an out of court settlement in some highway projects where the crisis hit firm moved court. It is challenging the arbitration amount.

IL&FS –the debt laiden firm has made arbitration claims worth about rs. 70 billion against NHAI, which are under various stages of resolution.

Government superseded the board of IL&FS on October 1. It has to learn that IL&FS ha new appointed Non-executive chairman, Uday Kotak and six-member board. The group’s debt could be much higher than earlier reported 91,000 crores as at March-end 2018.

One of the prime concerns of the road ministry and the NHAI in the IL&FS case is the future of pending projects. IL&FS would require an infusion of Rs 148 billion by March to meet its financial requirements. Most of the fund requirement will be fulfilled by the combination of an asset sale and fund infusion. Earlier, IL&FS was planning to raise RS.45 billion through a rights issue and another RS. 30 billion as the loan from its shareholders-LIC and SBI.

Members of the new board of IL&FS recently met the road transport and highways secretary- Nitin Gadkari and discussed the way forward for the pending cases. Nitin Gadkari recently told FE, “We will try to help IL&FS projects… we will try to save them.”