Has the viewpoint for Jet Airways altered after Q1 results? 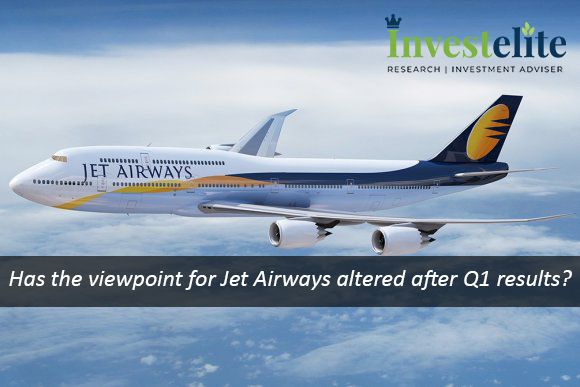 Has the viewpoint for Jet Airways altered after Q1 results?

On Tuesday, shares of Jet Airways  (India) Ltd rose 4.6%. It was an upbeat day in the equity market in general. For Jet Airways, in particular, reduction in debt and the RS. 2,000 crores-plus cost- reduction programme over the next two years, are key factors to track.

On Monday, June Quarters are declared after the markets, Are they so impressive? However, it was expected that the airline’s losses will increase sequentially and that has happened. In the March quarter, on a consolidated basis, the loss has increased to RS.1,324 crores, compared with RS.1,039 crores. For Q1, there was also the impact of mark-to-market forex loss worth RS.344 crores.RASK is revenue per available seat kilometre and CASK is the cost per available seat km; these are unit measurements for airlines and they both have declined sequentially as we can see in the above chart.

What explains the optimism in the Jet Airways’ stock then? Simply put, it’s the lack of negative surprises. The stock has been under pressure for a while and this is a small relief rally. As of now, the airline has managed to instil some confidence with no adverse audit observation, says Ashish Shah, an analyst at IDFC Securities Ltd.

Jet Airways puts a statement in the press, the airline continues to be a going concern. Jet Airways generates $300 million with a combination of debt, and sale and leaseback incentives. This money was used to reduce net debt to RS. 7,364 crores as on 30 June, a reduction of RS.785 crores compared to March-end. “The money raised has also helped the company fund the cash losses worth about RS. 1,000 crores for the June quarter,” added Ashish Shah.

For this fiscal year, Jet Airways has forthcoming debt repayment obligations worth RS.2,200 crores. This is not going to be easy to meet those obligations. It much depends on the progress on the infusion of capital and the monetization of the airline’s stake in its loyalty programme, two key proposals that the board considered. The outlook for the stock also depends to a large extent on developments relating to these two factors.

In the current September quarter (typically a lean one), airlines face higher costs (crude oil, rupee depreciation) and pricing pressures. Jet Airways also said that in its earnings conference call that the domestic market is facing relatively more pressure on the yields front.

Though, it doesn’t help that airlines launched a series of discounts in the recent past. All this means that cost concerns and lack of meaningful increase in fares are likely to keep sentiments subdued for airline stocks, even as India remains a fast-growing aviation market.