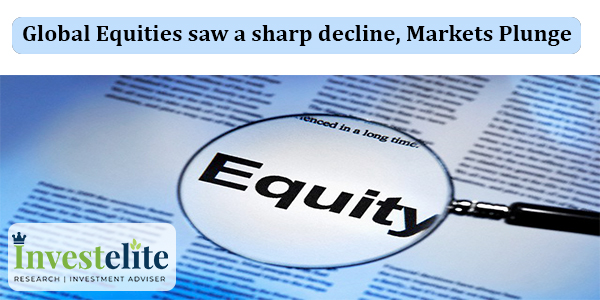 On Thursday, the sell-off in Indian equities intensified due to worries over slowing global growth. It escalating concerns in trading and also rising US treasury yields spooked investors across the world.

On Tuesday, the international monetary fund (IMF) downgraded its outlook for global growth from an estimated 3.9% in July to 3.7% in 2018 and 2019. On Thursday, IMF Managing Director Christine Lagarde said the global economy may not be strong enough to withstand the rising tensions.

On Wednesday, US Equities plunged led by technology stocks, as increasing US Treasury yields triggered a flight of money from risky assets such as equities. The Dow Jones Industrial Average fell 832 points to below 26,000 points, the third worst point decline in history. The Nasdaq dropped more than 4%, it is the worst drop in terms of percentage since June 2016.

The dip in US equities roiled Asian markets on Thursday, with the benchmark indices in China, Japan and Hong Kong slipping at least 3.5 %. China’s benchmark equity gauge Shanghai Composite closed 5.2% lower, the biggest loss since February 2016, and ended below the psychological 2600 mark.