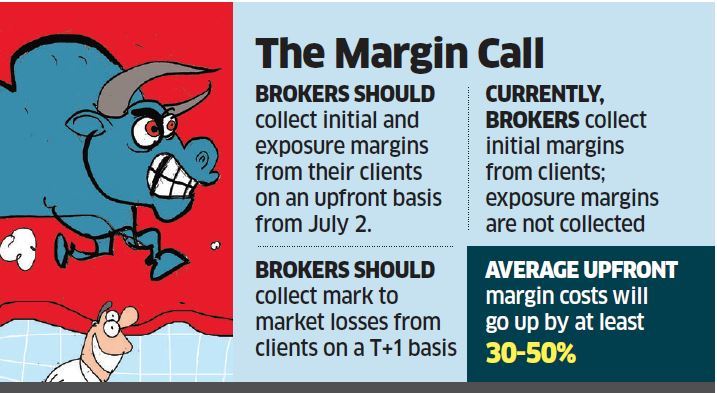 Punts in equity derivatives are set to get dearer starting next week. Traders will have to fork out higher initial margins for futures and options positions from July 2 as the capital markets regulator and exchanges look to discourage wild bets on stocks as part of their efforts to reduce the risks to the system. Brokers said the upfront margin requirements could rise by at least 30-50 per cent from current levels, likely affecting trade volumes.

Upfront margin is like a deposit that traders should have in their account at the time of placing a trade in futures and options. It is a percentage of the purchase price of the index or stock futures based on the software SPAN. That is why it is called SPAN margin. In addition to the initial or SPAN margin, there is another deposit called exposure margin, which brokers were expected to collect from their clients for trading in derivatives at the time of initiating a trade. But brokers seldom asked their clients to bring in this margin and ended up paying the exchanges from their pocket by borrowing from the clearing corporations. This practice is set to change starting July 2. The Securities and Exchange Board of India and the bourses have mandated brokers to collect exposure margins along with the SPAN margins. Clients will have to pay a penalty if they don’t pay exposure margins. “The requirement to mandatorily collect exposure margin from clients will increase the upfront margin costs by 30-50 per cent depending on the stock or the index,” said Kamlesh Rao, chief executive officer, Kotak Securities. 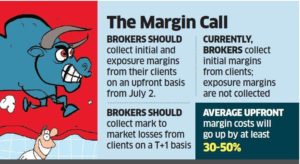 For instance, if a trader buys one lot of Nifty futures valued at over Rs 8 lakh, the SPAN margin — calculated based on volatility of the share— is roughly Rs 64,000, which is about 7 per cent of the contract value. Brokers said, in this case, the exposure margin would be roughly Rs 24,000. So, traders who paid Rs 64,000 as initial margin until now will have to deposit Rs 88,000 as total upfront margin, which is almost 38 per cent higher, for buying Nifty futures.
In short, the overall upfront margins will go up from 7 per cent to 11 per cent. The exposure margins are different for various indices and stocks. In most cases, exposure margin is lower than SPAN. But in some instances, like NCC and PC Jewellers, the exposure margin currently is higher than SPAN margins, which would more than double overall upfront margins. The move to compulsorily collect exposure margins from trader clients will impact volumes in the futures and options segment. he lower liquidity could widen the bid-ask prices in various stock futures, thereby increasing the cost of trading further. The bigger traders, who take multiple bets in a day, could end up becoming choosier.
Brokers said the regulator’s aim is to reduce the extent of borrowed or leveraged bets in the system. “Higher upfront margins will reduce the overall leverage levels in the system. This is good for the system because it will discourage traders from taking undue risks,” said Nithin Kamat, CEO of online broker Zerodha.
Meanwhile, the larger brokers have figured out a way to lower the overall upfront margins after July 2. Currently, brokers meet their margin requirements with exchanges through two systems; one, before the stock market opens the next day after the trades, known as T+0; and two, after the market opens the next day after the trade, known as T+1. Rules allow brokers, which adhere to the T+0 system (make the margin payment before the market opening), to reduce the SPAN or upfront margin for clients. Brokers said, in such a situation, the increase in the total upfront margin cost (SPAN and exposure) could come down from an average 30-50 per cent to 20-30 per cent.
“If brokers are opting for T+0 margin payment to the exchanges, the overall upfront margin requirement will come down but it will still not be as low as it has been so far,” said Kotak’s Rao.