Flexibility a lot in Indian large-cap stocks, but that could alter 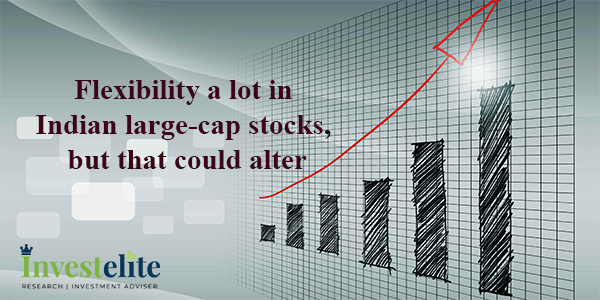 Flexibility a lot in Indian large-cap stocks, but that could alter

Plenty of risks gather for Indian markets due to an increase in oil prices, depreciation in rupees flirting with a dollar these days and a slow down in the economy is another risk.

For many month large caps stocks stood firm while mid and small caps unsuccessful. But the plenty of clouds are gathering, raising the odds of a correction in large-caps.In last three trading days (equity markets were shut on Thursday on account of Ganesh Chaturthi), the Nifty index shed 1.9%. Even then the Nifty 50 has risen 12% so far this fiscal year. In comparison, the Nifty Midcap 100 index is up by 1.5%, whereas the Nifty Smallcap 100 index has declined by 6.6%.

Jitendra Gohil, head of India Equity Research at Credit Suisse Wealth Management India says, “We think it’s about time that we should turn cautious on the large–caps as well”.He adds, the large companies are set for a correction in the next three-six months.

According to Vinod Karki, vice president (strategy) at ICICI Securities Ltd, the correction in large-caps rests on two factors. “First, the current premium valuations have their underpinnings on superior earnings growth expectations.” That means any disappointment on earnings front could lead to derating of valuations. “Secondly, the domestic investors have been absorbing the FPI (foreign portfolio investor) selling so far. The risk is that if domestic inflows start reversing due to high volatility in equity markets, then it could lead to a correction in large-caps too,” adds Karki.

According to the look above chart, Data sourced from Credit Suisse shows India’s price-to-earnings ratio premium to the world and the emerging markets is now at 29% and 69%, respectively. This is the highest in seven years till now. Indian markets are looking costly.

Its analyzed that India’s premium to the world and emerging markets have been higher than the current levels at the beginning of 2008.

India is the only equity market to see valuations expand in terms of 12-month forward price-to-earnings ratio on year to date basis.

It is expected to factor on markets if Reserve Bank of India increases interest rates. Gohil of Credit Suisse says, “If that happens, then consumption will be impacted and that in turn will have a bearing on growth”.

And then, the US Federal Reserve is expected to hike rates further twice this year. Liquidity will be a bit of a constraint, he says, adding, “In short, we are now closing the view that we don’t see a major correction in the large-caps.”

Investors should watch for bad surprises in the forthcoming September quarter results in near term and over the medium term, political uncertainty in the run-up to the general elections in May could weigh on sentiment.