Five stocks on traders to mark in September series 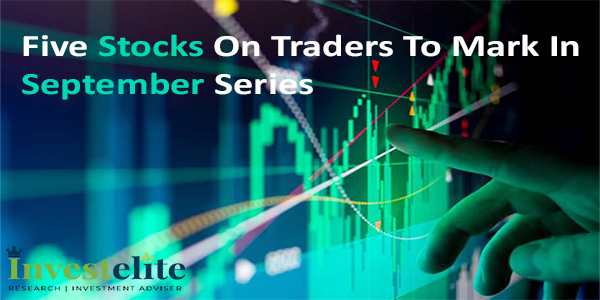 Five stocks on traders to mark in September series

After the ending of August series record market is taking the breath in its September Series. Some trend is visible in specific stocks as the most top open gainer in stock futures have seen a build up on the short side in September series.

Five stock with a high increase in open interest for September series. Below are the details of their near-term outlook.

After surging nearly 35% between January and August, the stock views is in profit booking. The company has consistently delivered earning a profit, but analysts believe that valuation has priced in position.

Nagaraj Shetty, technical research analyst at HDFC Securities said, “The stock has been going up continuously in the last few months without a reasonable correction.” He added, Exiting long positions or creating short position would be a better strategy at this point given the market situation and fall in the stock from higher levels.“Downside is expected till Rs 31,000-31,100″,he further added.

After the announcement of surprised capital expenditure plan of RS.1700 Crores sentiment around the stock turned bearish.

According to the analysts, the company’s return ratios could come down significantly if Balkrishna adopts a strategy of setting up more capacity overseas to gain market share. It has marginally cut earnings estimates on Balkrishna Industries to build in higher capital expenditure assumptions. The brokerage has maintained ‘reduce’ rating on the stock with a target price of Rs 1,300, citing expensive valuations.

Traders have built short positions in YES Bank’s futures as there is uncertainty over another three-year term for Rana Kapoor as a chief executive officer. The Reserve Bank of India has given permission to Kapoor to continue only until further orders. In the low probability event that RBI asks Kapoor to step down, it would be a significant negative for the stock, said Macquarie in a report. Nagaraj Shetty of HDFC Securities said, “The chart pattern is weak. The weakness is likely to continue till Rs 300 levels”.Shetti advises selling the stock at current levels or on any rise to Rs 360-365 levels.

Traders are shifting attention to pharma from expense sectors such as FMCG. It has seen that Dr Reddy’s has built a long position as market participants are turning their attention to sectors which have been beaten down.

Chandan Taparia, a derivative analyst at Motilal Oswal Securities said,” Dr Reddy’s has surpassed its falling supply trend line and holding its strength”.“Support is seen at Rs 2,500 zone, while momentum could extend towards Rs 2,787 which is the swing high made in July 2017,” said Taparia.

Chandan Taparia of Motilal Oswal Securities said,  “Torrent Pharma has support at Rs 1,750 and then at Rs 1,675 while upside a hold above 1,850 could take it towards the Rs 2,000 zone”.Torrent Pharmaceuticals has also generated interest because of the positive sentiment towards the pharmaceutical sector. BNP Paribas-owned Sharekhan believes that Torrent Pharma’s acquisition of Unichem will be cash accretive by the end of the current financial year. Strong growth across geographies and cost control measures will drive growth, said Sharekhan.