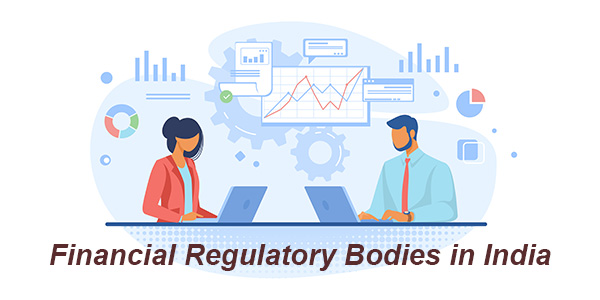 The Indian financial system is regulated by five major regulatory bodies, they are:

RBI as an apex monetary institution: Established in April, 1935 in Calcutta, the Reserve Bank of India (RBI) later moved to Mumbai in 1937. After its nationalization in 1949, RBI is presently owned by the Govt. of India. It has 19 regional offices, majorly in state capitals, and 9 sub-offices. It is the issuer of the Indian Rupee. RBI regulates the banking and financial system of the country by issuing broad guidelines and instructions.

SEBI as a regulatory body for the securities market:

Securities Exchange Board of India (SEBI) was established in 1988 but got legal status in 1992 to regulate the functions of securities market to keep a check on malpractices and protect the investors. Headquartered in Mumbai, SEBI has its regional offices in New Delhi, Kolkata, Chennai and Ahmedabad.

Audit the performance of stock market

IRDAI is an autonomous apex statutory body for regulating and developing the insurance industry in India. It was established in 1999 through an act passed by the Indian Parliament. Headquartered in Hyderabad, Telangana, IRDA regulates and promotes insurance business in India.

Headquartered in Mumbai, FMC is a regulatory authority governed by the Ministry of Finance, Govt. of India. It is a statutory body, established in 1953 under the Forward Contracts (Regulation) Act, 1952. The commission allows in 22 exchanges in India. The FMC is now merged with SEBI.

Established in October 2003 by the Government of India, PFRDA develops and regulates the pension sector in India. The National Pension System (NPS) was launched in January 2004 with an aim to provide retirement income to all the citizens. The objective of NPS is to set up pension reforms and inculcate the habit of saving for retirement amongst the citizens.