Euro Fell at the Lowest as shares open lower 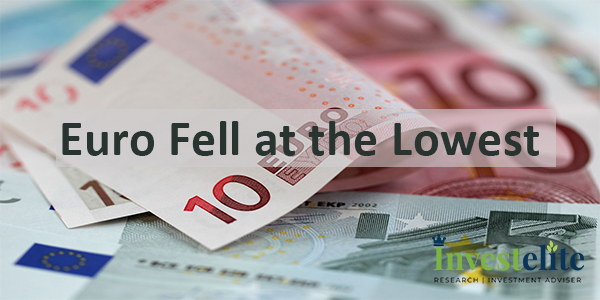 Euro Fell at the Lowest as shares open lower

On Friday, euro drops at to its lowest in nearly two weeks while Italy’s bond yields hit their highest in three after the government agreed to set a higher than expected budget deficit target that could put Rome on a collision course with Brussels.

On Thursday, the Italian Government targeted a budget deficit of 2.4% of gross domestic product (GDP) for the next 3 years, marking a victory for party chiefs over economy minister Giovanni Tria, an unaffiliated technocrat.

The deficit, though within the prescribed EU limit of 3% of GDP, is a concern for investors who fear the country’s anti-establishment government is not committed to tackling its huge debt load. Italy’s debt-to-GDP ratio stands at about 130%, the highest in the eurozone behind Greece.

European shares opened lower, with shares in Italian banks – whose big sovereign bond portfolios make them sensitive to political risk – bearing the brunt of selling pressure. The pan-European STOXX 600 index was down 0.3 % by 0743 GMT.

Italy’s two-year bond yields – the most sensitive to political noise in recent months were up 31 basis points in early trade at 1.09%(IT2YT=RR).

The euro fell to an 11-day low of $1.1615 (EUR=EBS) after suffering its worst one-day decline in seven weeks on Thursday.

“The 2.4 % target is not consistent with an improvement in the structural budget balance and hence they seem to be on a collision course with Brussels”.

“The key issue is what they assume on the budget beyond 2019. They are seemingly leaving the path of fiscal consolidation and that may not sit well with rating agencies.”

The falls in European shares left MSCI’s All-Country World Index <.MIWD00000PUS> down 0.1 % and set for its first weekly loss since early September.