India’s insurance regulator on Friday gave an unprecedented go-ahead to the Life Insurance Corporation of India’s proposal to take over IDBI NSE 10.13 % Bank and rescue it from a crippling crisis caused by massive rise in bad loans.

The board of Insurance Regulatory and Development Authority of India (Irdai), which met in Hyderabad on Friday, okayed LIC’s investment proposal as a special case due to IDBI Bank’s precarious financial position. The Mumbai-based lender has the highest bad loans in the industry at nearly 28% of total advances and posted aloss of Rs 5,663 crore last year. IDBI Bank’s shares jumped on the news and the impending capital infusion, which may be worth more than Rs 9,000 crore in one or more tranches. This will provide a breather to the bank and give it the means to address some of its biggest problems. “The Irdai board on Friday allowed LIC to buy out 51% stake in IDBI Bank,” said a member of the board who did not want to be identified.

“LIC will have to sell it in the future and bring it down to the regulatory requirement of 15%.” This could mean LIC would have to start cutting its stake from 51% in the next few years and bring it on par with norms for other insurers. This is the first time that the insurance regulator has eased its investment rules to such an extent. The Insurance Regulatory and Development Authority (Investment) (Fifth Amendment) Regulations, 2013 allows insurers with assets of over Rs 2.5 lakh crore to buy up to 15% equity in a company.

Under special provisions, LIC can hold up to 30% with the approval of the government, investment committee and the regulator. The proposal also goes against LIC’s own investment mandates, which prevents it from taking over any business. The fact that it went through could be due to IDBI Bank’s desperate financial situation and the government’s desire to make LIC provide funds so that it doesn’t have to do so.

With LIC coughing up the money, the government has one less bank to deal with whenever it considers capital allocation for public sector banks. Irdai’s okay also caps weeks of intense negotiations between the government, LIC and Irdai. While the government was keen on LIC playing a big role, officials at the insurer and the regulator kept mum on the issue. Some officials also gave an indication that the proposal would not be kosher as IDBI Bank is under the RBI’s prompt and corrective action (PCA) rules and therefore may not be a viable investment proposal for LIC.

Banks under PCA are barred from lending though they can continue accepting deposits. Under normal circumstances, LIC would have found it difficult to invest in IDBI Bank. The proposal was also not on the agenda of Irdai as it was a routine quarterly board meeting fixed weeks earlier. But it was a tabled matter which meant that the board members had to discuss it. The deal may have to climb another regulatory hurdle at the Reserve Bank of India.

“We will have to see what RBI does and whether RBI will allow them to hold on to their stake in other banks,” said Ashvin Parekh managing partner Ashvin Parekh Advisory Services. “The government may want LIC to buy stake in more PSBs.” LIC, which owns 10.82% stake in IDBI Bank will be allowed to buy an additional 40% by investing Rs 9,000 crore in the bank. IDBI Bank has a market cap of Rs 22,954 crore. 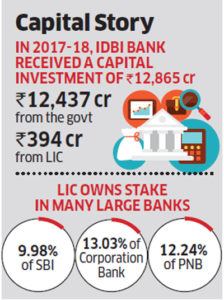 Shares of the company jumped 10.02% on news of LIC taking over the majority shareholding in the bank. IDBI Bank with the highest non-performing loans in the banking industry— gross NPA at 27.95% of the total advances, as on March 31, 2018 and core equity capital of 7.42% — has been seeking capital from the government. During the last financial year, government and LIC infused equity capital of Rs 12,471 crore and Rs 394 crore, respectively in the Bank. IDBI Bank is also in the process of selling non-core assets to free up capital and meet regulatory capital norms.

The bank had posted a loss of Rs 5,663 crore in the fourth quarter on higher provisions. It has put the life insurance subsidiary with Aegis and Federal Bank on block a year ago though the deal is still under works. “If this deal goes through, LIC will increase its stake to 51% from 11% in IDBI while the government’s stake will proportionately come down to around 40% from 70%,” said Asutosh Mishra, senior analyst at Reliance Securities. “This could be a precursor for the privatisation of IDBI Bank because it is the only PSU which is outside an Act of Parliament. SBI is governed by SBI Act, other PSU banks by Bank Nationalisation Act and other banks by Companies Act.”