Bank Stocks are on the hike despite depressing Q1 results, Why? 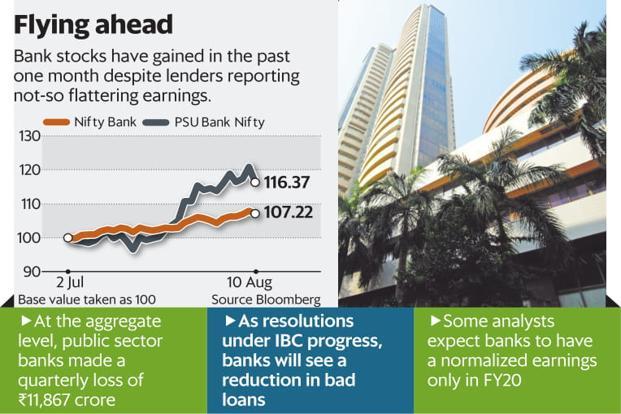 Bank Stocks are on the hike despite depressing Q1 results, Why?

In the past one month, stocks of banks have been observed at its peak, majorly public sectors are gaining the most. In general, in some cases, investors have been more eager and enthusiastic about a recovery in banks than the bank management. According to the charts of banking indices, The Bank Nifty has risen 4.5% since July, while the public sector banking index has gained 14%. For March quarter,22 out of 36 listed banks posting losses this despite.

The factor is that investors believe the worst is ended for banks. Considering the peak of provisioning lenders have done over the last  3 years, investors believe banks have enough insurance against toxic assets and from here on earnings can only improve.

In the March Quarter, the large losses were seen in the final sweep towards the clean balance sheets.

Will the newly found enthusiasm of investors, such as Morgan Stanely withstand the test of time on Indian Banks?

Well, Q1 results of banks show that this optimism is misplaced.

Public sector banks reported cumulative losses of  RS.11,867 crore. Net profit of private lenders dips on an aggregate level. ICICI Bank Ltd reported a historic loss, Axis Bank’s performance left much to be desired and the country’s largest lender State Bank of India (SBI) reported a quarterly loss of RS.4,876 crores. Slippages have slowed, but most of the recoveries have been tied to just two bad assets successfully resolved under the insolvency and bankruptcy code.

One needs to only look at the provisions banks have made against the top 40 accounts referred to under the IBC. Provisioning ranges from 65% to 80%, which means bankers are expecting huge haircuts to get back to its business. In June quarter, lenders made 65% more provisions compared with a year ago.

Finally, recoveries are not really higher than the historic trend for banks. Write-offs are also not actually lower. Even at the core business level, banks have shown their weak performances. The pre-provisioning operating profit of most corporate lenders has hardly grown and, in many cases, has fallen.

Some lenders will show a tagged improvement compared with others. Banking indices mentioned that corporate balance sheets are improving with leverage coming down, future asset quality is likely to be better. Revival in credit growth, too, will make bad loan ratios look less bad. As recoveries through insolvency proceedings trickle in, interest income and margins are likely to show spreading.

The point is, when will the improvement in performance come through? Some analysts, such as Gautam Chhugani of Bernstein, looks a more normalized earnings year only in FY20.

Even so, lenders under prompt corrective action will continue to suffer as their main source of income lending is severely restricted.

In short, Indian banks should compress for another year of slightly warm performance and their stocks should start reflecting the moderation that these banks managements have shown in their outlooks.