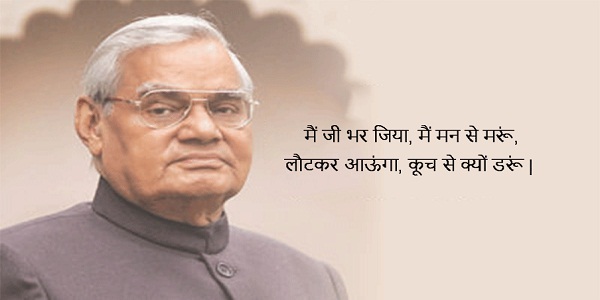 An incredible journey of Atal Ji from poetry to politics inspires us to adore them. He was an accomplished writer and has written much poetry in his lifetime. Talking about his journey, he was the son of a school teacher, born on 25 December 1924 in Gwalior. Later at the age of 18, In 1942, he joins the Quit India Movement and also arrested. In 1951, he joined the Bharatiya Jan Sangh (BJS). Before being appointed as the political secretary of Shayma Prasad Mookerjee, Vajpayee was a journalist. After winning the Balrampur seat in UP, In 1957, he entered in Lok Sabha. In 1962, for the first time, he was elected as Rajya Sabha member.

A journey as a parliamentarian for 47 years, he was elected 11 times to the Lok Sabha, and twice as a Rajya Sabha member. In 1968, he became the BJS national president. Even he was put in jail in 1975 during the emergency. In 1977, he became the foreign minister in the Janata Party government. In 1980, he was instrumental in forming Bhartiya Janta Party from BJS and there he comes to its first president. His first term as prime minister in 1996 lasted just 13 days. 2 years later, in 1998 he headed the government for 13 months, and then for a full five-year term from 1999.

Atal Bihari left a long-lasting impression for our nation. Their contribution to making nuclear power state is unforgettable. Under him, India successfully carried out the nuclear test, or Operation Shakti, in Pokhran on 13, May 1998. During 1999, America made a phone call to Mr Atal Bihari Vajpayee at night and advised him to give Kashmir to Pakistan or else Pakistan would launch nuclear bomb on India. On this statement, Atal Ji replied,”I already have considered that 50% India has been wiped off but I can assure you, there would be no sign of Pakistan on the world map by tomorrow morning” and he hanged up.

Vajpayee was an active politician who launches Delhi Lahore Bus services, Sada-e-Sarhad (Call of the Frontier) and operation Vijay to clear Kargil. The Kargil War with Pakistan broke out during May-July 1999 with Vajpayee as the PM.

In 2004, BJP loses parliamentary elections and Vajpayee resigned as the Prime Minister. At the end of 2005, he announces his retirement from politics at the age of 80. In 2009, suffers a stroke. In 2014, he was awarded the Bharat Ratna. He was also a recipient of the Padma Vibhushan.In the same year in 2014, his 90th birthday observed as good governance day and yesterday at 16th August 2018, their death came after a long spell of illness.

Our Prime Minister of India, Narendra Modi described his grief on the sad demise by saying Atal Ji as “personal and irreplaceable”  loss for him and has  “lost a father figure“.

We have lost our inspiration as the death of personality lead void left. Here is the Quote of Atal Bihari Vajpayee Ji that inspires us and beloved will remain in the nation’s heart forever.

With this, INVESTELITE RESEARCH pays a floral tribute to the departed leader and hope that our nation will make them immortal from which they have taught us valuable aspects of our nation’s wealth.